End of the Tour Stuff (sorry it’s so late)

Hey folks, here are some final images from the bike tour.  It has been a while since the tour ended (although new dates are in the works for the WNY area, around X-Mas time).  After the tour ended, it was a bit weird not biking anymore, like some post-pardum bike separation or something.  Anyway, here are some images from 1. Olympia, Wa (where the Real Dream DVD had several encore performances), 2. The show in Chehalis, WA only had one paying audience member, who mistakenly thought he was attending an open mic. night, 3. (not sure why this shifted to italics, but don’t know how to change it). Entering Oregon, and rode over a bridge with so much tree bark on the shoulder of the road (from logging trucks), that biking monster truck tires were required, 4. Show at the Waypost in Portland had a strong Buffalo ex-pat contingent, and they were the most into the screening on the whole tour.  One women in the audience was in tears, as the images of Buffalo played on the screen.  5. David and Marc getting patriotic in Springfield, Oregon, 6. The lovely Julie outside the Ditch Projects in Springfield, Oregon.  The was the last show of the tour.  7. David and friends playing “stump” at Ditch Projects.

More Tuff Stuff press regarding the screening at Ditch Projects, in Springfield, Oregon

Sorry we have been slow at updates. Intermittent access to the internet, biking around in 100+ degree weather and not having much down time has left little chance. We’ll be posting more photos and stories in the next couple of days, when time allows.

A brief report: had a fantastic time on Whidbey Island, hanging out with our friends Ashley and Eli of the band LAKE. They have an amazing piece of land, right near this lake we went swimming in, and we did the screening outdoors. It was super fun to have a couple of opening bands: Chrissy and Flurpy, which were both hilarious and dreamy.

Biked down to Seattle and did a show at the Vitta Cafe. It was a pretty good show but way hot. Also David and I set a record by devouring 3 pizzas in about 10 minutes.

In Tacoma the show fell through and we wound up camping in someone’s yard. The couple we stayed with were super nice, despite the framed picture of George Bush above their TV. The woman even brought us strawberry shortcake!

Then it was down to Olympia, where we did a show at a neat all ages space called Nothern. A light turnout but enthusiastic crowd. During the encore an applause-o-meter was implemented to decide the fate of “Choose Your Own Adventure”.

Next on to Chehalis and the Matrix Coffeehouse. The show was a pretty poor turnout: we wound up playing the show for one guy who showed up on a TV (in actuality he thought he was coming for song group night). Now its the homestretch back to Portland and Eugene… 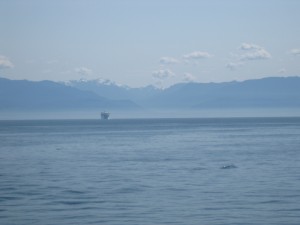 Here is an image from the ferry from Victoria, BC to Port Townsend, WA.  Ferries are where we can get some relaxing time in, as we usually fall asleep the minute we sit down while riding them.  Something meditative about them…    That would be Olympic national forest in the background.   Last time Marc and I were here, we summoned an elk from the mountains.  No elk this time around.

Picture post-card from Victoria, BC.  Victora seems like a cross between a small Toronto, and London, England.   Marc and I endulged in Canadian sweets at an awesome German bakery (amazing butter tarts!).  In our down time, we also eat  Crunchie  and Oh Henry bars, respectively.

Departing from the house of Ross and Marliana, who were kind enough to host us, and also did much work in terms of the screening at Open Space Gallery.  They even took us swimming before the show!  Totally nice and cool people!   If only I had my camera when Marc jumped off a small ledge into the water.  Imagine a newly born fawn diving for the first time.  Pretty funny.

Remember that old Fugazi t-shirt with either Ian or Guy are in a similar pose while rocking out?  A dance party ensued after our screening at Open Space (a great idea, indeed!), and Marc attempted a head-spin at one point.  I drank about a dozen beers, and went into trance.   Some guy danced around naked, and some girl kept speaking to me in Spanish.   Can nerdy indie filmmakers rock out?  Yes we can. 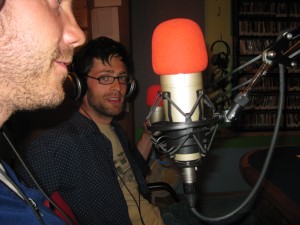 Marc and I being interviewed in Nanaimo, BC.  Check out the link posted below to hear what we had to say… 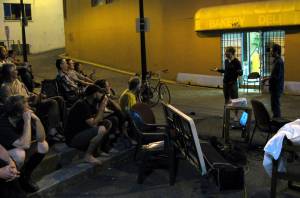 Outdoor Screening in Nanaimo, BC

Had a fan-tastic show in Nanaimo, where about 20 people congregated outside the community radio station to take in the show. Meanwhile, during the screening, we snuck away inside the station where we were interviewed on the People First radio show.

Hear clips from the show here and here.

Special thanks to Michael Carpenter for setting up the show, Kevin and People First radio and CHLY.

Other Nanaimo highlights included eating deep fried Nanaimo bars, seeing seals by the docks and an amazing mediterranean dinner at the Thirsty Camel.

The next day we headed south, trucking the backroads through some cute towns like Duncan “The City of Totem Poles” and Chemius “The City of Murals” and finally took the ferry on yonder to Brentwood Bay, where dinner found us eating PB & J and getting kicked out of park we had sent up camp at.

Finished the ride on down to Victoria today, went swimming with our hosts and taking a breather before the show gets rolling.

Moscato and Gracon during the Q/A session at the Pacific Cinemateque.  It was a little rough to have to sound coherent after 10 hours on a bike, and totally exhausted.  I think at this point we were debating the nuances of cycling spandex quality, and then something about the Buffalo Bills and capitalism.

Tuff Stuff from the Buff on the PC marquee.  A neat little sign plugging the event, in digital form.  We came up with the idea of handing out little hand-bills before each event via bike.  Lots of press in local weeklies, and it was fun to see posters of the event, and stills from Kelly Spivey’s film in front of the theatre, in poster form. 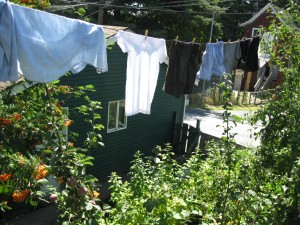 Hanging laundry at Amy’s house in Vancouver, BC.  Who is responsible for ironing the spandex?   Amy’s house in located near a park where the outline of the mountains can be seen in the distance.  Played some Frisbee in the park.  The houses in the area resemble those of Buffalo.  Big lumbering structures with angular rooftops.

This is Marc and I leaving from Portland.  Special thanks to Emma for her kindness and for bringing us to the What the Heck fest.  Yeah, we cheated a bit, and caught a ride to Anacortes, WA.

Had an enjoyable time hanging out @ What the Heck Fest. I had an installation of my film The More Things Stay the Same on a loop in a tent along with some books on anarchism and a couple of empty 40s. On Sunday, I participated in a panel discussion on running DIY spaces. Met some folks doing some interesting projects like the All Ages Movement Project.

After Heck, we beat it on up through the back roads through Edison and into Bellingham where, in true drifter fashion, we camped out by the railroad tracks overlooking the bay; it was an incredible sight. The next day we woke up early and, after some crazy miscalculation, busted ass biking for 10 hours in the dead of summer. We made it to Vancouver with about a half hour to spare before the screening.

The screening was great: a sparse turnout but enthusiastic audience. Special thanks to Amy Kazmerycheck and DIM Cinema. It was an honor to mark their one year anniversary of alternative programming.

On to a lecture tonight and tomorrow Nanaimo, where we are very excited about the bathtub races and famed Nanaimo bars.

Headed up to Anacortes today for what the heck. Gotta finish packin’!

tough stuff from the buff: experimental & activist video from the fringes of buffalo, ny
Blog at WordPress.com.
Loading Comments...